Abstract: This research aimed to describe and find out whether implementation of Problem-Based Learning can improve scientific explanation skills in biology learning about the environment. The research method was Classroom Action Research through the implementation of Problem-Based Learning. This classroom action research consisted of two cycles, which were concluded by planning, acting, observing and reflecting. The research subject was a natural science class consisting of 34 students. Data were collected by essay test, observation method, interviews and documentation. Data were validated by the triangulation technique consisting of three components: data reduction, data presentation and conclusion. The research results showed improvement in the scientific explanation skills of students on the implementation of Problem Based Learning. The percentage improvement of students' scientific explanation was 61% in claim, 53% in evidence, and 51% in reasoning.

Education is everyone's learning experience for survival. Education in the school environment occurs because of interactions between the commissions in the school consisting of students, teachers, school officials, and parents or guardians (Astuti, 2017). Interactions in the classroom occur between teachers and students. Interaction activities between teachers and students that occur reciprocally for educational purposes can also be called the learning process. The learning process that students go through involves cognitive, affective, and psychomotor abilities (Putri & Hamid, 2016).

An initial observation that has been done by researchers in One Senior High School in Surakarta during the learning process showed that 52.9% of students chatted with their friends, 20.6% of students played on cellphones, 47% of students responded to teacher questions with simple answers, 17.6% of students responded to questions demanding a lengthy explanation of the process or reason for the phenomenon and 35.4% of the students did not respond to teacher questions, thus, many students do not respond to the ongoing learning process. Minimal student response in the learning process results in low student understanding (Fauziah, 2010), and, therefore, influences students' answers about explanations of a phenomenon (Rohwer & Rice, 2015). Explanation of the reason or cause of a phenomenon is an activity in preparing a scientific explanation (Berland & Reiser, 2008), and the ability of students to provide scientific explanations is less than ideal in most contexts.

The stages of a Problem-Based Learning model, therefore, accommodate the development of students' scientific explanation skills. The ‘meeting the problem’ stage allows students to understand the existing problem so that various questions can arise at this stage. The problems stimulate students to make preliminary explanations as the initial stage in developing scientific reasoning. The ‘problem analysis and learning issues’ stage is a phase for students doing problem analysis. This stage provokes students to come up with a claim in the form of a solution to answer questions at the meeting of the problem stage (Kumala et al, 2017). The third stage is ‘discovery and reporting’, and students are tasked with collecting data to prepare a solution. This stage enables students to find evidence in scientific explanation skills (Faizah et al, 2018). Another scientific explanation component that is accommodated through the discovery and reporting stage is the reasoning component. Group discussions at the discovery and reporting stage train students to develop reasoning appropriately by linking claims and evidence (Alozie et al, 2010). The next stage of solution ‘presentation and reflection’ is presenting solutions that have been prepared and reflected upon. Problem solutions provided need to address the data that has been collected. This stage enables students to reflect on the solutions that have been made to connect claims and evidence to the best reasoning (Drăghicescu et al, 2014).

Based on the results of the background description, researchers formulated the following problem: "Can problem-based learning improve scientific explanation skills in environmental materials for One Surakarta High School students?" Following the problem formulation, the study explored whether there was improvement of students' scientific explanation skills after using Problem-Based Learning.

The research was conducted at One Senior High School Surakarta, located at Monginsidi Street No. 40 Surakarta. The subjects in this study were in a natural-science-class, which comprised 34 students. The class selection was based on students' lack of ability to convey scientific explanations judging by the observation results.

A claim is an idea, opinion or hypothesis about an event (Kaya, Erduran & Cetin, 2012). A claim must describe what happened or identify the causative factors of an event (Novak, Mcneill &Krajcik, 2009). A claim is the easiest component to disclose. Claims are made to be the basis of other components (Amielia, Suciati & Maridi, 2017). The results of the increase in claim components in this study can be seen in Figure 1, as follows. 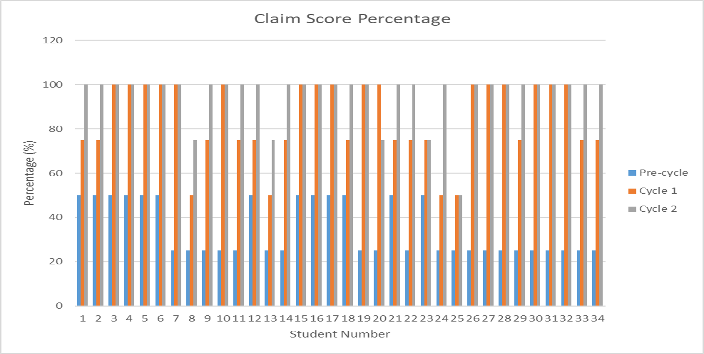 The average percentage of claim component scores in the pre-cycle stage to cycle 1 increased by 50%, while cycle 1 to cycle 2 increased by 11%. The percentage of the claim component score of each student mostly increased across the cycles. But a decrease in the percentage of claim scores was observed in one student from cycle 1 to cycle 2. One student who experienced a decrease in claim scores was the student number 20. The decrease in student claim scores was due to the lack of understanding concepts about environmental change materials, and student number 20 entered the class 40 minutes late, hence, did not follow the learning stage of meeting the problem and problem analysis of the learning issues. Meeting the problem and problem analysis stages both play a role in forming a scientific understanding of students in order to compose the initial claim.

The next stage of Problem-Based Learning is discovery and reporting, where students act as researchers who are tasked to collect data and information in developing solutions. Students collect data used as evidence relating to the causes and impacts of environmental damage in a particular area in cycle 1 and environmental conservation efforts through recycling of contaminants in cycle 2. The evidence obtained by students comes from tracing information through learning resources and conducting direct investigations in the field.

The evidence obtained during the investigation process was written in a worksheet. Data collection activities or evidence in the form of facts about an event enable students to compile evidence components on scientific explanation capabilities (Faizah et al, 2018). The results of the increase in evidence components in this study can be seen in Figure 2, as follows. 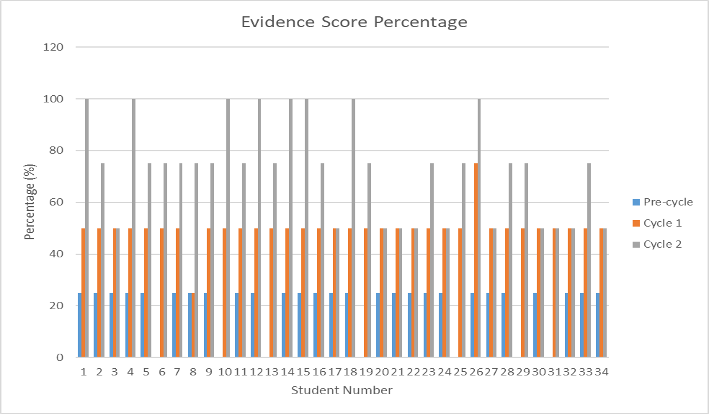 Figure 2. indicates the percentage gain of the students' scores on the evidence component of the pre-cycle stage, the first cycle, and the second cycle. The highest evidence score increase from the pre-cycle to cycle 1 was obtained by student number 26, with 50%. Some students did not experience an increase, with a fixed score percentage of 25% obtained by student number 8. The increase in score was also experienced from cycle 1 to cycle 2, the most significant increase being 50%.

In the pre-cycle stage, seven students (6, 10, 13, 19, 25, 29 and 31) received a percentage of evidence score of 0%. These students are judged incapable of disclosing evidence according to reading. The evidence mentioned by students at the pre-cycle stage was not present in the reading and did not corroborate the statements that had been made before.

The increase in grades from cycle 1 to cycle 2 was due to teachers' guidance at the discovery and reporting stage. Teachers ask students to look for evidence from valid, accountable sources. If possible, the teacher asks students to see the evidence they have previously obtained from various sources. Some groups got evidence from the students' direct observations. Students who are used to finding and compiling evidence from valid sources can improve their concept understanding skills. High student concept understanding skills facilitates students’ gathering evidence (McNeill & Krajcik, 2009). The percentage of evidence scores in cycle 2 was shown to increase compared to cycle 1, which indicates that guidance by teachers can actively build students' skills in solving problems and assist students in improving reasoning activities and understanding of scientific concepts (Smyrnaiou et al, 2012). Thus, students find it easier to compile evidence that can support their claims.

The solution presentation and reflection stage is the stage for students to make presentations about their solutions and reflect. Problem solutions provided by each group need to address the facts and information that have been collected. Students discuss to develop reasoning that can relate each piece of evidence to the student's statement. At this stage, students play a role in connecting the information data obtained into a solution according to each group's idea (Drăghicescu et al, 2014).

The solution presentation and reflection learning phase can accommodate students to bring up the reasoning component in compiling scientific explanations. The solution to the student's problem that is finally found can change from the formulation of the solution or the initial statement that the student made as a hypothesis, therefore, at this stage, the students must re-correct the initial claim that they have made. The results of the increase in reasoning components in this study can be seen in Figure 3, as follows. 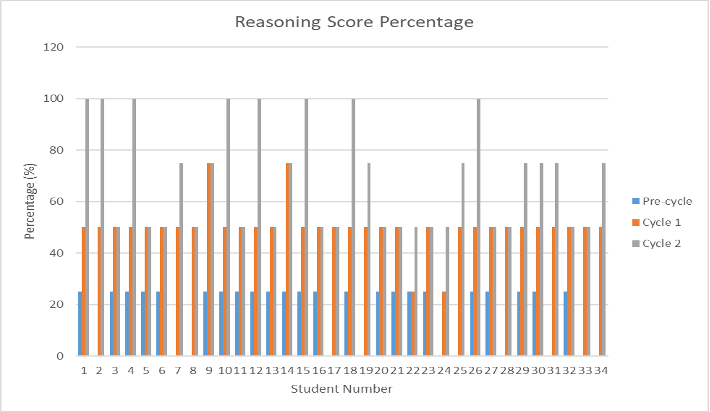 The corrective action for cycle 2 is that teachers should assist students in actively helping them improve reasoning activities and understanding of scientific concepts. Teachers should guide students to listen and pay attention when other groups give presentations on how to solve a problem. Teachers should provide students with several opportunities to ask questions and argue and give feedback when students finish presenting results, asking questions or making remarks. Corrective action in cycle 2 can increase the percentage of evidence scores from cycle 1 to cycle 2. Thus, the improvement provided by the teacher can improve the student’s understanding of the concept so that students can connect supporting evidence with claims following scientific principles.

The increase in the percentage of evidence scores in cycle 2 is directly proportional to the increase in reasoning scores in cycle 2. The improvement of the two components of scientific explanation is directly proportional to the statement that the completeness of the evidence owned by students influences the preparation of reasoning to reinforce the statements that have previously been made (Supeno et al, 2017).